“Jesus loves me this I know, for the Bible tells me so“. But is all of the Bible so simple that even a little child can understand it?

Well, the central message of the Good News of Salvation in and through the Lords Jesus Christ is indeed simple to receive, yet far from simple to fully understand. for instance, just how the alienated and mortally flawed spirit of a human being is regenerated is a profound mystery. And how God can be a triune being existing simultaneously in three personages, Father, Son, and Holy Spirit is mysterious beyond words. What is more, how He, in and through the Holy Spirit can indwell a regenerated human being is incomprehensible to even the cleverest person.

In Revelation Chapter Ten we encounter a mystery that may not be unlocked in our life-time, if ever. ‘When the seven thunders spoke, I was about to write; but I heard a voice from heaven say, “Seal up what the seven thunders have said and do not write it down.” The Seven Thunders themselves are enigmatic but we can understand something of what John is referencing here. The key issue however, is that we do not know what they said; their message is a mystery to us. And what is more, there is nothing in the rest of Revelation, or anywhere else in the Bible for that matter, that reveals what was said.

Jesus, in Himself and by virtue of what He said and did, is the clearest revelation of the Triune Godhead to humanity, yet even He sometimes spoke mysteriously. Matthew chapter thirteen contains seven parables of the Kingdom of Heaven. The first three are given to the masses in an outdoor setting and the last four to his disciples in an indoor setting. After delivering the first of these parables to the crowd the disciples ask Jesus why he speaks in such obscure language. His reply is that “The knowledge of the mysteries of the kingdom of heaven has been given to you, but not to them” (Matthew. 13:11). So, what Jesus was teaching in the form of parables was a mystery to all who were not enlightened by him. In addition to this, He pointed the disciples to things which they were never going to understand in their life-times. For instance, when they asked him when he could return to herald in the end of the world, he replied; “No one knows about that day or hour, not even the angels in heaven, nor the Son, but only the Father” (Mark 13:32). Wow! In His humanity even Jesus did not know the exact time of His return to earth. in his humanity Jesus did not know the exact time of his return to earth. 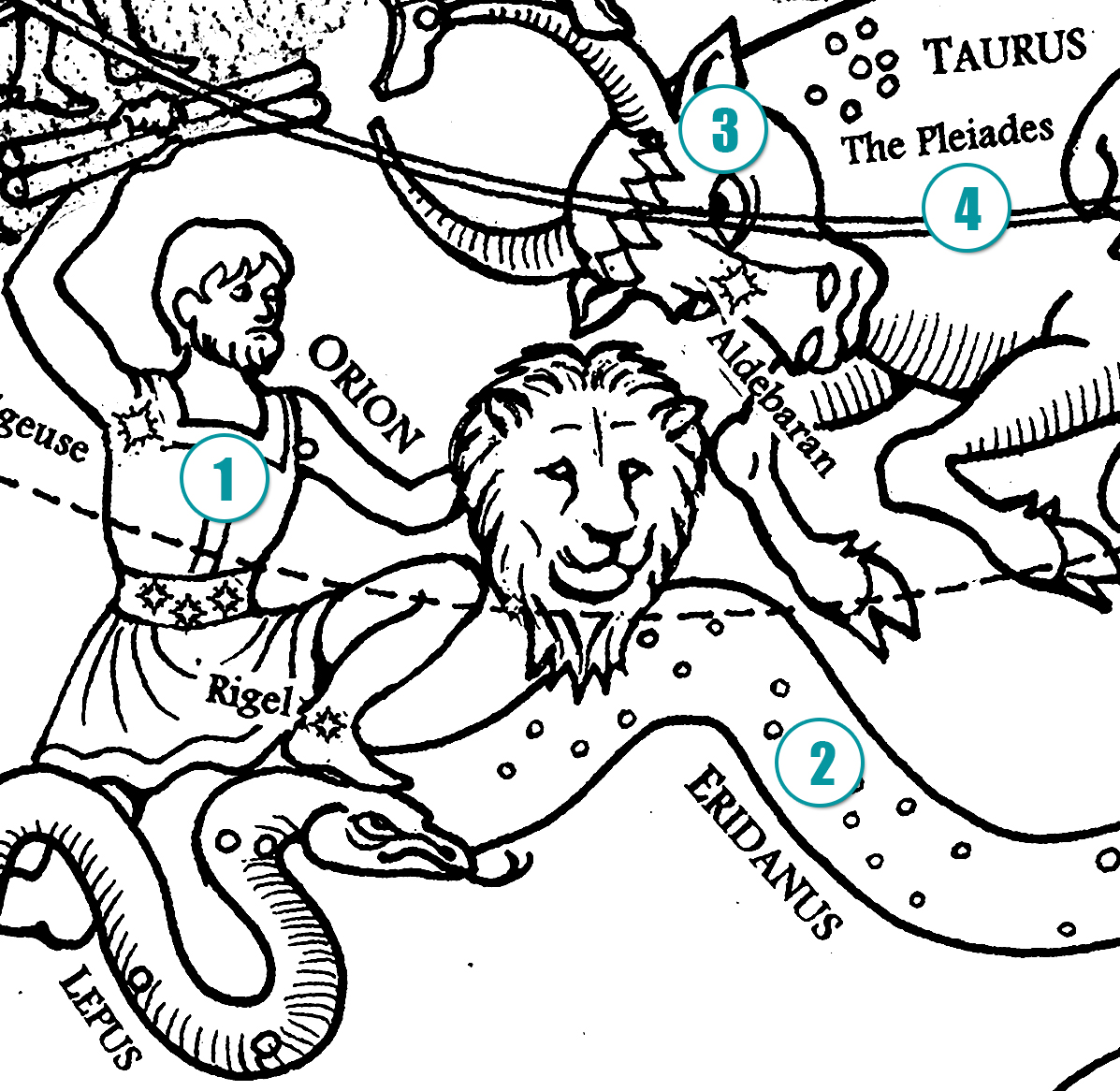 c  root of sin is the desire to know everything, but if we did, would we not be gods? God’s ways and thoughts must be higher than ours (Isaiah 55:8-9), for He is God and we are not. Equally, if the Bible is truly the inspired written Word of God then it must contain elements of mystery.

Now, to the particular mystery referenced in Revelation 10. I have already introduced and started to develop the idea that John was using the astronomy of his day as a device for writing what the Holy Spirit was inspiring him to record and the Seven Thunders is another example of this. One of the most well-known constellations is Orion (marked 1 in the image), pictured as holding a scroll in one hand, the head of a lion in the other, and his one foot is planted on the ‘sky river’ Eridanus (2). Just to his right and slightly above him is the constellation Taurus (3), the bull, which symbolises something very dark and sinister that I will explain when we get to Revelation chapter 13. In the shoulder of the constellation of Taurus is a group of seven stars (number 4 in the graphic) known as the Pleiades (Job 9:9). John apparently uses the constellation Orion to represent the mighty angel of Revelation 10 and the Pleiades to represent the message of the Seven Thunders, but this still does not shed any light on the message itself; it is a mystery. In fact, the angel then utters the words, “There will be no more delay! But in the days when the seventh angel is about to sound his trumpet, the mystery of God will be accomplished, just as he announced to his servants the prophets.” (Revelation 10:6-7).The Bible does indeed contain mysteries because it is genuinely God-breathed,so

The Bible does indeed contain mysteries because it is genuinely God-breatherd, so our task when we come to the Bible is to diligently seek to understand what we can and to marvel at the mysteries that we cannot yet fathom. I find this both exhilarating and freeing.

I study the written Word of God with an expectation of revelation within the limitations of my understanding, yet with the deep comfort of knowing that it is God alone who reveals and enlightens what He is pleased to make known.

In my next post I plan to write about the ‘end days’ indicated by the angel’s prophetic words in chapter 10:6-7.