One of the powerful declarations at the ‘It’s Time’ national day of prayer was “can a country be born in one day?’ and the over one million voices answering “Yes!”.

On the 22nd April 2017 Christian men, women, and children converged on a farm just outside Bloemfontein to intercede for a nation in crisis. They came in cars, busses, trains, and planes, bicycles, and even horses. They came from all over South Africa, and by the time the prayer meeting started there were well over a million believers joining hearts, minds, spirits, and voices together with one accord. We have to ask the same question the prophet Isaiah asked; ‘Who has heard of such a thing? Who has seen such things?’ (Isaiah 66:8) Nobody in South Africa has ever seen a gathering of this size before, let alone a peaceful, God-honouring gathering like this. Yet it is not just the day itself that was so remarkable.

To bring just 100,000 people together in one place usually requires many months of planning and facilitation, but the preparation for this gathering took just six weeks! The cost of a meeting of this magnitude is enormous yet there was no appeal for money and no offering taken. After much smaller open-air meetings the litter and damage is often considerable, but not this time; the location was left as it was found, clean and restored. Remarkable! 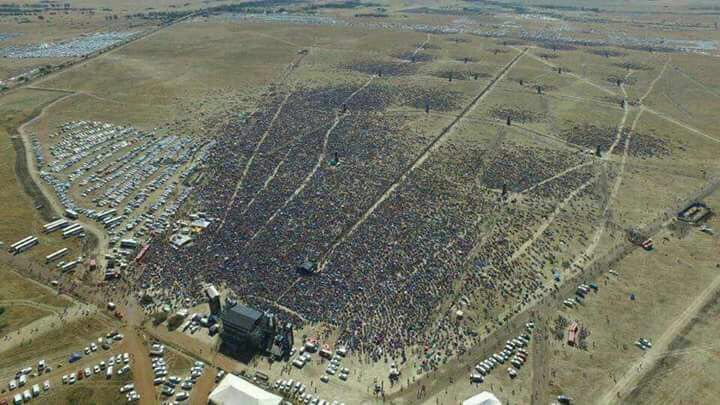 Look at this picture and ask yourself how many ushers were needed to park the cars and get the people into their assigned areas? How did the organisers manage to get so many speakers and TV screens and such a huge stage, and where did the money for this come from? How come there were no reports of major accidents before, during, or after the event? Surely, the organisation for the event was a miracle in itself?

I was not able to be there, but as I talk to those who did attend, read the accounts on social media, and meditate on this extraordinary event I come to the following conclusions:

I have not even tried here to write about God’s role in all of this for surely it is obvious that He cares, that He hears the cries of His people, and that He is able to act mightily. It is equally obvious that the Holy Spirit facilitated the event in the most remarkable way and that this work of His will be recounted by future generations.

Now, in what way could we expect this mighty happening to affect our nation, and can we legitimately trust that God is already at work in the affairs of our land? Can we claim that in some inexplicable sense God answered Isaiah’s Question of “Can a land be born in one day or a nation be delivered in an instant?” (Isaiah 66:8).

This is what I see happening:

OR perhaps this is not what will happen at all! Perhaps we will witness the hand of God sweeping down and removing the cancer at the heart of our society with surgical precision! Perhaps we will see our land re-born more dramatically and swiftly than we can even imagine. 1 Corinthians 2:9 “No eye has seen, no ear has heard, no mind has conceived what God has prepared for those who love him”

Here is a point-by-point eyewitness account by Truth is The Word colleague Candice De Carvalho for those of you who, like me, were unable to attend this historic gathering:

Other quotes taken from what Angus said: 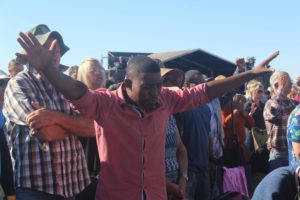 “People hardly have the time to pray, how could we expect change to take place? If we could pray to God for rain, just imagine what He could do with our prayers to heal the sick, to help the country, to turn hearts back to Him who is risen”

“The gathering is not a political meeting, but one of faith. Jesus is eagerly awaiting to hear from us. When people are desperate, they always pray to God for help”

I was reminded that we, the body of Christ are His bride. By his blood alone, He has made it possible for us to approach the throne of grace with confidence. Just as Esther entered the throne room of the King to plead for the nation of Israel, so we, as we pray, approach God now. He showed me that His scepter is stretched out to us a nation who are praying, and what we ask for our country in the name of Jesus, we will receive.