Scripture Reference: John 8:1-11 I am writing this in the first person as if I were the woman who encountered Jesus when the Pharisees hauled her before him.  I invite you to be this woman too. Try to see through her eyes, hear with her ears, and somehow, through this process, encounter the Lord Jesus yourself. I can’t deny it; I am not perfect and I admit that what I did was wrong. I was married off very young to a man much older than myself. I was more of a social asset for him than a life partner, and he showed me no affection whatsoever. So when a young man started paying me attention I was flattered and taken in my him. To my shame it didn’t take him long to persuade me go to his rooms where he seduced me. The door flew open! My heart seemed to stop in my chest! Three men burst in and grabbed me by the arms. They didn’t give me any time to rearrange my clothing as they dragged me off crying. I was paralysed with fear, because I knew I would almost certainly be killed. They were Pharisees, and had caught me in the very act of  adultery. I looked despairingly around for my lover; surely he would protect me, or had they arrested him as well? I searched his face, but all I saw was a smirk and and a wink to the men who were dragging me away.  I had been set up and betrayed. They hauled me down the road and then flung me in a heap before a man I had never seen before. Immediately they challenged him. “Teacher”, they said; “in the Law Moses commanded us to stone such women. Now what do you say?” I was petrified with terror. In my peripheral vision I could see men around me stooping to pick up jagged rocks from the side of the dirt road. I looked up at the stranger before me. He had no rock in his hand. There was no look of contempt on his face. Instead, his eyes seemed to reassure me.  Then he bent down and, instead of picking up a rock, he wrote something in the dust with his finger. I couldn’t see clearly from my angle but it looked like a word written in Hebrew. The Pharisees kept on throwing questions at him, harsh and clamouring and eventually he straightened up and I heard him say, “If any one of you is without sin, let him be the first to throw a stone at her.” Then he stooped once more and wrote another word in the sand. The crowd lent in and peered at the words he had written. My heart was racing, my eyes were awash with hot tears of shame and terror and I was at the point of passing out, yet I was aware that something else, something strange was happening. The men had stopped shouting and a supernatural silence had descended on the crowd. There were no sounds at all, not even a dog barking or a child crying. Then I heard a muffled thud, and another, and yet another and I  saw small puffs of dust rising all around me as one by one the men dropped the rocks they were carrying. Then they started to leave, the older men first, and then the others, until only my ‘saviour’ and I were left. He looked down at me and said, “Woman, where are they? Has no one condemned you?” “No one, sir,” I said. Then in a voice thick with compassion he said, “Then neither do I condemn you. Go now and leave your life of sin.” He reached down, took me by the hand and helped me to stand. 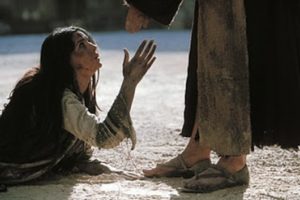 Now dear reader, what has Jesus revealed to you about Himself in this encounter? Take time to see the scene as though you are the woman he has saved from humiliation and possibly even a painful death. What is Jesus showing you about how he regards you?