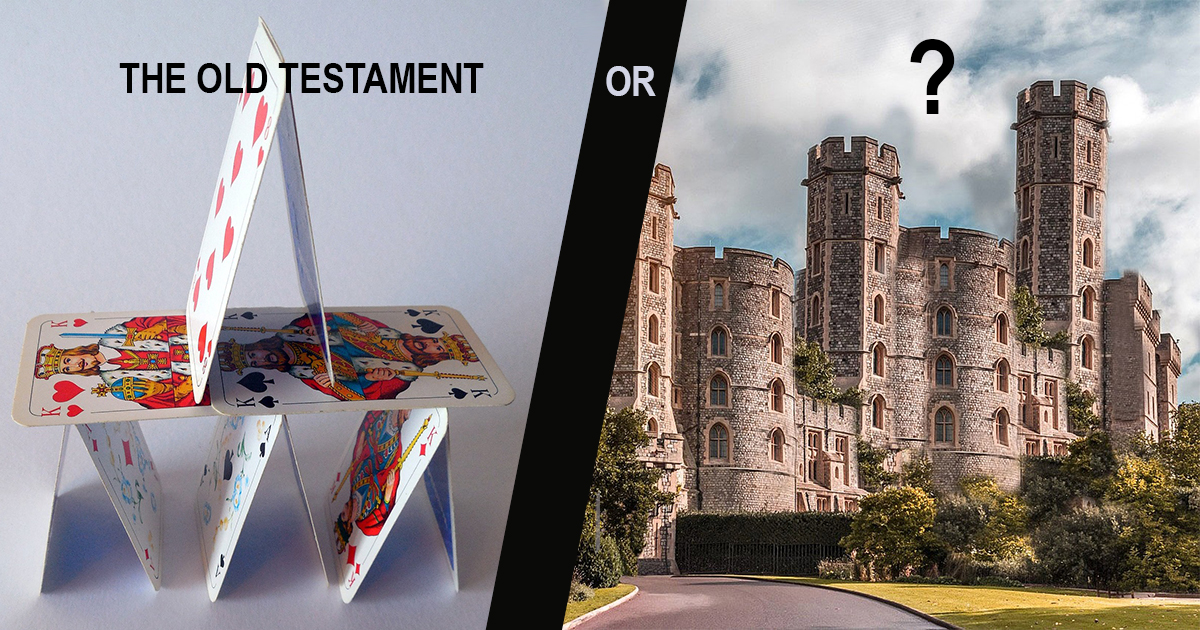 In this article, I respond to a challenge to comment on Andy Stanley’s ‘Aftermath’ series of sermons.

I recently wrote an article about the five preliminary questions we need to answer before censuring a preacher. As an example, I used the recent flood of criticisms aimed at Andy Stanley’s contention that it is time for Christians to unhitch from the Jewish scriptures. In the Q & A session of the TruthTalks podcast, my daughter Karen challenged me to write about what I think of Andy’s recent teachings. So, I have done my homework… and here are my preliminary observations given as answers to three of the five proposed questions I suggested people use as an aid to deciding whether something is worth confronting publicly. After this, I will respond to some of his specific contentions. I suggested we ask ourselves:

There are at least three important issues here. (i) The inspiration and authority of the Bible, (ii) The relevance of the Old Testament, and (iii) How we communicate the Gospel to the current and coming generations of unbelievers.

Well, I have read his book ‘Deep & Wide: Creating Churches Unchurched People Love to Attend’, listened to all three parts of his Aftermath series on YouTube (see links at the end of this article), read a transcript of an interview where he responds to his critics, and read through his 27 page booklet ‘The bible says so, is not enough anymore’. In addition, I have viewed Dr Brown’s ‘Line of Fire’ comments on Andy Stanley’s approach, and I have read or viewed a number of hostile critiques of him and his theology. So, I am satisfied that I understand pretty much what Andy is saying and what he is not saying.

His heart and motivation come through very clearly in the interview he gave to RELEVANT Magazine. Also, Dr Michael Brown, a theologian I respect, affirms Andy’s pure motives and pastoral heart. I have no reason to criticise Andy as a person and so I have no need to contact him directly – any negative comments I have are with his approach and the implications of some of the things he teaches.

Specific observations and responses to Part One of the Aftermath series

The first observation I have is that we need to listen to all three parts of his Aftermath series before jumping to any conclusions. Most critics pounce on the ‘it’s time for Christians to unhitch from the Jewish scriptures’ statement in Part Three.

Secondly, the BIG point of almost all Andy says in this series is about how we can reach current and future generations with the Gospel.  His church model is ‘seeker sensitive’  and within this context, his major concern is with ‘how we talk about the bible, and specifically what we point to as the foundation of faith, which for most Christians, unfortunately, is the bible.’ He is not addressing how Christians view the Bible, or how we speak to each other about the Bible; his concern is how we use the Bible as our source of authority when addressing the current generation of unbelievers. This is key to understanding what he is trying to communicate.

Well, the very first believers came out of Judaism and they did have a ‘bible’, the 39 books of what we now call the Old Testament. They understood Jesus’ advent, crucifixion, and resurrection within the context of their scriptures. When Andy says that ‘the bible did not create Christians, Christians created the bible’, he is surely referring only to the New Testament. Of course, Jesus Himself is our source of truth, and yes, the Christian message stands or falls on the authenticity of the resurrection. But how do we and the generations that follow us come to know Jesus and how do we test the authenticity of the resurrection? Why through the New Testament scriptures, that’s how. And how do we appreciate the fullness of who Jesus is and what He taught and did without reference to what Andy calls ‘the back story’, the Old Testament?

I think that in an attempt to communicate HOW we should be approaching new generations of unbelievers he is casting doubt on the relevance of the entire Bible. However, In his booklet defending his belief and method, he writes; ‘I believe the bible is without error in everything it affirms. I believe what the bible says is true, is true’. So, how then are we to understand his call for us all to unhitch from the Old Testament?

Where I agree with Andy, is that agnostic post-modern/post-truth generational folk just do not accept biblical authority, so what is the use of quoting the Bible to them and expecting them to believe us simply because the ‘Bible says so’. I agree that we should be starting with a testimony to Jesus and His life and ministry. Moreover, we should be testifying to His reality and the power of the Gospel by demonstrating it in our lives.

However, Andy has another concern; he is troubled by the onslaught of atheist scholars on the factual and moral veracity of the Bible. He contends that if they are able to discredit one part of the biblical account then the entire ’house of cards’ will fall. The attacks he refers to are directed mainly at such things as the creation account, Old Testament history, accounts of God-directed genocides, and so on. These critics claim that the God of the Old Testament is a baby-bashing monster and that the stories of His working with His chosen race are just rural myths. Well, my contention is not that we should abandon the Old Testament because of these attacks, but that we should rather explain its purpose, style, and the human influences in its composition. It is not that the Bible is erroneous, or that God could be perceived negatively in the Old Testament, but that so many people do not understand its purpose.

Specific observations and responses to Part Two of the Aftermath series

In Part Two of his series Andy contends that we should not try to mix and match the Old Covenant with the New Covenant. He claims that ‘Paul saw the incompatibility of the old and new covenants’. Then he adds that ‘God changed covenants. That first covenant was over. The covenant that God established with the nation of Israel was a means to an end, and when Jesus showed up the end for that covenant had come.’ Therefore, he says, ‘you’ve got to let it go.’ So, if I take this and read it in conjunction with what he says concerning his belief that all of the Bible is without error in everything it affirms, I come to the conclusion that he holds the Old Testament to be inspired and true… but no longer relevant. He confirms this when he says, ‘once you’ve got the new covenant you have to let go of the old covenant… it’s not our covenant, ours is better…’ I have serious problems with this sort of statement. Jesus and His followers validated the authenticity and influence of the Old Testament and often quoted from it. If the Old Testament fails critical scrutiny then what does this imply concerning the New Testament? Besides, whilst the Old Testament has such things as the miraculous parting of the Red Sea, so the Gospels have Jesus (and Peter) walking on water. If we give atheistic critics and next-generation seekers a free pass on their objections to God’s dealing with the Amalekites in the Old Testament, how then do we defend His dealing with Ananias and Sapphira in the New Testament? If the Old Testament is discredited then so is the New Testament. And, if the Gospel accounts are suspect then on what basis do we claim that the resurrection actually occurred?

My firm conviction is that we should rather affirm the authenticity and relevance of the whole Bible and counter critical objections by explaining what the scriptures actually are – a divine-human collaboration designed to instruct and draw humanity into an eternal relationship with the triune God.

Specific observations and responses to Part Three of the Aftermath series

In Part Three of his series Andy Stanley makes his much quoted ‘unhitch’ comment, but he has already set out his ideas regarding this in Part Two.  He builds his argument in this final part of the ‘Aftermath’ series around the Jerusalem conference described in Acts Chapter 15 and claims that the ‘church leaders unhitched the church from the worldview, value system, and regulations of the Jewish scriptures.’ He says that they did this in order to make it easy for Gentile converts to come to faith and that we should do the same.

Just so I am clear on where I stand – Firstly, I don’t agree that the seeker-sensitive approach to church is a biblically viable model for ‘doing church’. It may be an effective pre-evangelism tool, but I do not think it meets the criteria for authentic church family life. Secondly, I do not agree that we should ditch the Old Testament as irrelevant to the Gospel and modern life. However, I do believe that we need to present the Gospel as a Jesus-centred rather than a Bible-centred reality, without implying that two-thirds of the scriptures are irrelevant and confusing. The Gospel is both Jesus-centred and Bible-based.

From what I have read and heard, it seems that Andy Stanley is genuinely concerned for the integrity of the Good news of salvation in and through the Lord Jesus Christ and is passionate about communicating this to current and future generations of unbelievers.

However, he is not just an evangelist to the unsaved, and he is not just a pastor to a few American churches – he is the leader of the largest church in the USA and one of the most influential voices in the Christian world. So, I do hope that he will re-examine his ‘theology’ and perhaps weigh more carefully what he communicates to the church at large.

Here are the links to related articles and audios

Audio TruthTalk of this article

Connecting the Dots article  and Sermon

The Bloodthirsty Warrior God of the Bible article

Here are the links you can follow to access what I have used as my source material for this article.

Andy Stanley’s 27-page response to his critics regarding his beliefs and methods: https://tg353-3637c0.pages.infusionsoft.net/