Just days ago the United Kingdom voted to opt out of the European Union and already people are blogging, tweeting, and writing articles on how Brexit might lead to the ten-headed beast of Revelation… give me a break!

Here is an example from ‘The Trumpet’ in an article titled ‘Bible Prophecy Foretold a Brexit!’: “In choosing to leave the European Union, the Brits actually brought about an event Bible prophecy foretold was going to happen!” And here is a little something from ‘Prophecy News Watch’: ‘Does the vote in the United Kingdom to leave the European Union have prophetic implications for the “Revived Roman Empire” described in the Book of Daniel and Revelation? This is the question that will be on the mind of Bible Prophecy students for months to come as we watch what happens next in both the United Kingdom and the rest of Europe as more nations now threaten to follow England’s lead’. Well, this will not be on my mind for months to come, that’s for sure. 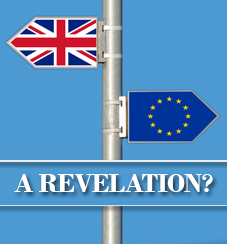 I remember the premillennialist excitement when the EU grew to exactly 10 members… the ten-headed beast had arisen! But then another, and another member joined until there were 28. Now some of the same folk are claiming that with the exit of the UK the number of EU members will shrink down to 10 as 17 other nations follow the British example. Yes, sure.

The problem is not whether somehow, at some time, someone can reduce the EU to 10 nations, or a ten-man executive committee, or whatever. No, the problem is the stubborn insistence that the book of Revelation is to be interpreted as a slavishly literal calendar of present and future events. As I have contended several times in my book ‘Revelation in the Stars’ and here on this blog, the 10 heads of the beast are SYMBOLIC of state authority and ‘headship’.

The whole of Revelation is to be interpreted from the understanding that it, and the book of Daniel for that matter, are examples of apocalyptic literature. In this type of literature pictures, sounds, colours, time periods, and numbers all stand as symbols for principles, patterns, and universal truths.

No, the Lord Jesus does not have a sword where His tongue should be (Revelation 1:16), and no, Satan is not a big red dragon (Revelation 12:3)!

There is already far too much hype and confusion concerning Brexit brought about by the media.  Now, Christian ‘scholars’ see the need to wade in and stir the turgid waters even more! And to what end? All they have is speculation and conjecture and that is just not helpful to anyone in these unstable and stressful times.

Please excuse my ire (along with some sarcasm) but I am tired of just tut-tutting into my tea cup and saying nothing.

Note to self and others: Let’s keep our eyes on Jesus. He is not confused or conflicted. He is the same today as He was 2,000 years ago, and before that; a rock of security, a compass pointing true North, and the source of all truth.

Next week I plan to post another short rant on the unconscionably biased and unethical role of much of the media in the Donald versus Hillary debacle that is troubling the United States so much in these days. Until then I will just simmer with barely contained indignation.