I was challenged to write my previous post on the current crisis in South Africa when I read Revelation 12:11

‘They overcame him by the blood of the Lamb and by the word of their testimony; they did not love their lives so much as to shrink from death.’

We as Christians testify to the salvation and lordship of Jesus Christ, the Lamb of God who shed his blood for humanity and who rules now as lord of all. Furthermore, we are expected to place such a high priority on the calling to witness that our own comfort, even our very lives, are secondary.

Now those who hold to a futurist interpretation of the book of Revelation will think that I am quoting Revelation 12:11 out of context because they believe that this portion of scripture refers only to future end-time witnesses. By the same reasoning, they project verse 10 into the future: ‘Now have come the salvation and the power and the kingdom of our God.’ Surely this is a grave error? True, the Kingdom of God awaits a final glorious manifestation, but the Kingdom came when Jesus was born to Mary, and it is present here and now in salvation and power. The devil no longer has any authority, and he has no access to heaven – he has been cast out, ‘hurled to the earth’. Part of our ‘word of witness’ is to proclaim the truth that Jesus reigns over all… right now.

I wrote about this in a previous post but I think it is worth repeating a portion of it here:

‘In Revelation 4:8 God is described as The One ‘who was, and is, and is to come’. His Kingdom has come, is coming, and is yet to come; the Lord Jesus came in person about 2,000 years ago, He is active now through The Spirit and the church, and He is coming again soon to judge the living and the dead. Jesus responded to His disciples’ delight that demons obeyed them with the words, “I saw Satan fall like lightning from heaven” (Luke 10:18) yet we know that the devil’s expulsion from heaven came when Jesus rose from the dead some time later. Time is not linear and one-directional in the spiritual realm as it is here on earth, but even so we can understand Jesus’ words as meaning that in His life and ministry on earth He was bringing about the devil’s expulsion from heaven; a ‘ministry’ that reached its dramatic climax when Jesus rose from the dead, and which continues to be manifest in the ministry of the church’.

I know I am not the first to say this, but it is a mistake to think that Satan has any real authority over anyone, least of all over Christians. It is equally mistaken to think that he has no power. Many people confuse authority and power and treat them as though they were two words for the same thing. Authority is the right to do something and power is the ability to do it. The devil has no right to do anything to anyone, for Jesus made it clear that He alone holds all authority when he declared that, “All authority in heaven and on earth has been given to me.” (Matthew 28:18) Yet it is biblically and practically undeniable that the devil is powerful. The book of Acts records how Jesus ‘went around doing good and healing all who were under the power of the devil…’ (Acts 10:38). We underestimate our adversary when we think of him as a toothless pussycat rather than a roaring lion, but we overestimate his ability to harm us when we assume that he has the right to do so. When we become aware of demonic activity affecting us we have the delegated authority of Jesus to command that they cease and desist. We are not helpless victims, we are Christ-authorised and Spirit-empowered over-comers. 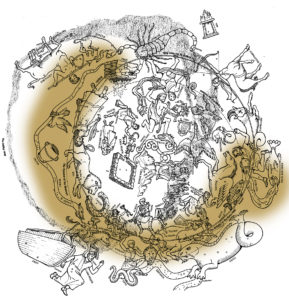 Revelation 12:13-17 contains a dramatic summary of 2,000 years of satanic activity on earth. The devil has two main targets in his sights; the Jewish nation and the Church. The ‘woman who had given birth to the male child’ (verse 13) represents Israel who ‘birthed’ Jesus the messiah through their finest example of womanhood, Mary. The reference to the ‘wings of a great eagle’ (verse 14) is drawn from the constellation of Aquila and symbolises the divine protection of Israel over two millennia of persecution. The devil has hunted down Jews wherever they have prospered, yet despite his most heinous and devastating onslaughts the Jewish people continue to flourish and the existence of the state of Israel continues to be a powerful testimony to the providence of Almighty God.

John draws on another star sign, Aquarius, to describe the satanic onslaught against the Jewish people and the protection that God affords them. He writes that ‘from his mouth the serpent spewed water like a river, to overtake the woman and sweep her away with the torrent. But the earth helped the woman by opening its mouth and swallowing the river that the dragon had spewed out of his mouth.’ (Revelation 12:15-16) The brightest star in the constellation of Aquarius is Sa’ad al melik, which is an Aramaic phrase meaning ‘the record of the pouring forth’; its Hebrew name means ‘the river’. The water pouring from Aquarius is depicted in the star sign as being swallowed up by a fish whose name is Piscis Australis, and the brightest star in this constellation is named ‘the mouth’. Of course, the fish has from the very beginning been a symbol of the Church of Jesus Christ. Antisemitism among Christians is an anathema for we are called to stand in unity with the Jewish people and to protect them when they are persecuted.

The chapter ends with a graphic depiction of how the devil has rechannelled his hatred from the Jewish people to the disciples of Jesus; ‘Then the dragon was enraged at the woman and went off to make war against the rest of her offspring – those who obey God’s commandments and hold to the testimony of Jesus.’ (Revelation 12:17). But take heart fellow Christians. Peter wrote that our ‘enemy the devil prowls around like a roaring lion looking for someone to devour. Resist him, standing firm in the faith, because you know that your brothers throughout the world are undergoing the same kind of sufferings (1 Peter 5:8-9). And James added; ‘Submit yourselves, then, to God. Resist the devil, and he will flee from you.’ (James 4:7). Jesus, of course, summed things up when He said, “In this world you will have trouble. But take heart! I have overcome the world.” (John16:33)

In my next post, I plan to start explaining the infamous beasts of Revelation chapter 13 and I am sure you will be fascinated and ultimately encouraged by what happens to them.