A woman clothed with the Sun, an enormous red dragon and a victorious male child, equals an Easter Victory.

Chapter Twelve of the book of Revelation starts Part Four which, like the other parts of the book, covers the full period between the first and second coming of Jesus. At a cursory read, it seems as if the chapter is just about a woman and a dragon, but there is another character embedded in the narrative who, although seemingly invisible, is central to the whole story. I am writing this post during the week leading up to Easter and so I am going to focus on this ‘hidden’ character and then double back and describe the full scene to you in my next article.

I have already pointed out in my previous post that the woman in Chapter Twelve is linked to the constellation of Virgo and the dragon to the constellation of Hydra. Although this is important to understand, it is far more important that we fully comprehend the glorious drama that these representations depict. Virgo symbolises the people of God, more specifically Israel, and Hydra symbolises Satan, the great adversary of the people of God. The primary reason the Old Testament people of God existed was to provide the means by which the saviour of humankind could come into the world. The devil’s only hope of vindication and continued freedom was to prevent Israel succeeding in birthing the Messiah, and if he couldn’t do that it was to kill the Christ Child himself. The intensity and scope of this drama require an article of its own, so I will return to it at a later time.

Israel’s greatest moment came, not when it received the Ten Commandments, and not when she occupied the Promised Land, but when Mary, her finest offspring, gave birth to Jesus Christ. The history of the chosen nation is replete with great figures such as Moses, King David, and Solomon, but none as fine, noble and worthy of honour as Mary. This is why she herself declared, “From now on all generations will call me blessed” (Luke 1:48) 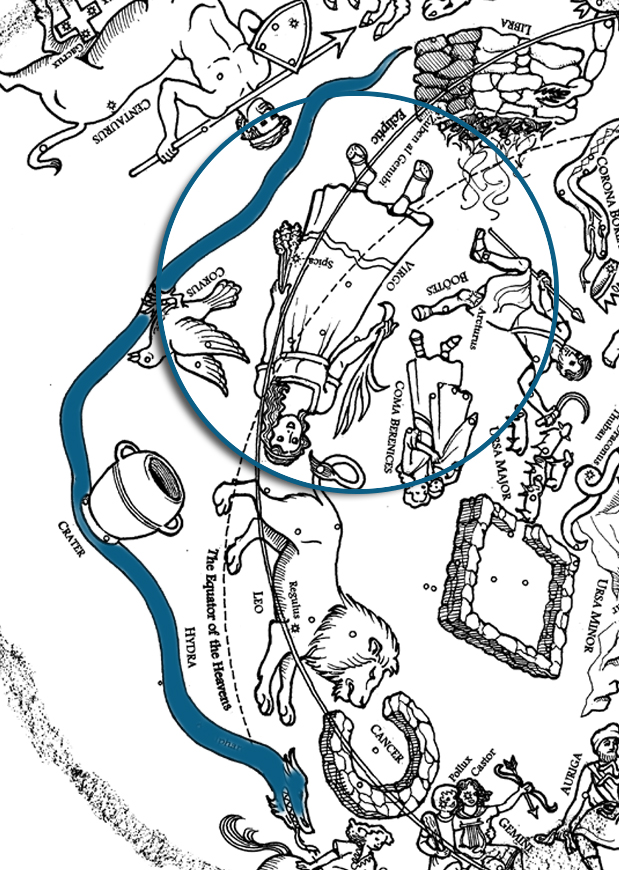 Mary gave birth to ‘a son, a male child, who will rule all the nations with an iron sceptre’ (Revelation 12:5), and his name was Jesus. Verse five then goes on to record that ‘her child was snatched up to God and to his throne‘. But what about His 42 months of miraculous deeds and sublime teachings? Where is the reference to His atoning death on the cross of Calvary and His glorious resurrection on the third day after that? Well, it’s not that John regards these things as unimportant, it is because in this section of Revelation he wants us to grasp something else – the stupendous victory over Satan that Jesus’ ascension back into heaven completed.

The cross is implicit in the narrative of Chapter Twelve in words such as, ‘they overcame him (Satan) by the blood of the Lamb and by the word of their testimony’ (Revelation 12:11). These words take us right back to the ‘Lamb, looking as if it had been slain, standing in the centre of the throne’ in Revelation 5:6, and “Worthy is the Lamb, who was slain to receive power and wealth and wisdom and strength and honour and glory and praise!” (5:12). The word of testimony of disciples of Jesus Christ has always been, “It is true! The Lord has risen!” (Luke 24:34). Incidentally, a movie has just been released and for the first time in years I can recommend a Hollywood production to you; it is called ‘Risen’.

Because of His sacrificial death on the cross and His rising from the tomb in death-conquering glory, Jesus vanquished Satan, stripped him of all authority, and expelled him from Heaven! Revelation 12 describes Michael and his angels casting the devil out of Heaven (12:7-9), and as this happens a loud voice declares: “Now have come the salvation and the power and the kingdom of our God, and the authority of his Christ. For the accuser of our brothers, who accuses them before our God day and night, has been hurled down” (12:10).

In this eternity changing victory at Calvary, the Lord Jesus Christ settled the penalty of the broken covenant between God and mankind, bringing the human race back into a position of potential peace and fellowship with the Godhead. He removed all and any grounds for accusation by the devil against the children of God. He expelled Satan from his presence and denied him access to the throne of the Almighty. Then, in a sealed tomb in the Garden of Gethsemane, this same Jesus broke the power of death, rose bodily from its clutches, and in so doing created a new resurrection template of eternal life for all who believe in Him.

So, this ‘Good’ Friday and this ‘Easter’ Sunday, remember His death and celebrate His resurrection, but also be so very grateful for His VICTORY… for His victory is our life now and the assurance of the glory to come.