It is strange that we tend to remember embarrassing moments with such clarity. I have preached over a thousand different sermons, but the ones that I remember most vividly are those that embarrassed me.

In one of my very earliest sermons I covered the book of Jude in twenty minutes. After I had said “Amen” and sat down, my mentor stood up and asked the congregation to summarize the message in three points. There was total silence for a full minute, so he turned to me and asked me to repeat my three main points. What three points?! I had about thirty-three points. That was embarrassing, but it was a good lesson.

Years later, with a couple of hundred sermons now under my belt, I decided to preach on the end times. I called the sermon ‘Eschatological Options’ and for forty minutes I took the congregation through the various views on the end times.

I put up detailed charts and carefully explained Amillennialism, Postmillenialism, and Premillenialism. I covered the pre-tribulation, post-tribulation, and mid-tribulation views of the Rapture. For good measure I threw in some material on the Resurrection, Judgement, and Millennium.

I felt well pleased with myself and hung around after the sermon so people could engage with me.  But everybody avoided me and my welcoming smile got tighter and tighter. It disappeared completely when I overheard a lady saying to her husband, “What was he saying? I didn’t understand any of it? Escha-what?” This was another embarrassing lesson. 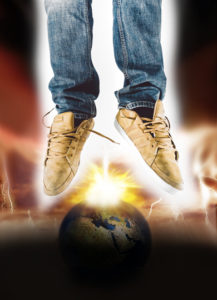 Many people are interested in eschatology in these troubled times. We were recently exposed to the misguided predictions of one Harold Camping and there is quite a bit of current speculation on what will happen in December 2012 (don’t expect me to comment on that). So, once again, I feel the need to give some input into this area. However, I have learned something from those early lessons and so I am not going to attempt to explain end time theories in less than eight hundred words. Instead, I want to make just one point. Irrespective of what your doctrine of the end times is, or what interpretive scheme you have been taught, one thing is clear; in the end we will all stand before Jesus. He is both the beginning and the end (Revelation 22:13), He is the first and the last, and the focal point of eschatology.

There are many scriptures concerning Christ’s judgement of the saved and the unsaved but our focus is so often on the texts that have to do with what will happen to those who don’t know Jesus. I want to shift the focus for a moment to the judgement of believers, for Romans 14:10-12 states that ‘We will all stand before God’s judgment seat. It is written: “‘As surely as I live,’ says the Lord,’ every knee will bow before me; every tongue will confess to God.'” So then, each of us will give an account of himself to God.’

The question is, ‘what will the judgment of believers be for?’ There is ample evidence in scripture that if we have been born again of the Spirit into a relationship with Jesus then we have the assurance of eternal life with Him (Here are just three – Romans 8:16, Hebrews 6:18, and 2Timothy 1:12). So, if the final judgment of believers is not to decide who may enter heaven, then what is it for?

Paul writes, ‘ I have fought the good fight, I have finished the race, I have kept the faith.  Now there is in store for me the crown of righteousness, which the Lord, the righteous Judge, will award to me on that day — and not only to me, but also to all who have longed for his appearing.’ (2 Timothy 4:7-8) What a wonderful thought! When we have finished our lives on earth we can enter eternity with the knowledge that it has all been worth it. Between this world and the next there is a judgement but, for the believer, it is the judicial determination of reward, not of penalty.

The one who will judge us is the same one who said,

“for God did not send his Son into the world to condemn the world, but to save the world through him. Whoever believes in him is not condemned…” (John 3:17-18)

Those who have believed in Jesus for salvation will stand before Him at the end of our lives on earth. He who shed His blood for us will evaluate our lives and reward us accordingly (2 Corinthians 5:10). This gives me great comfort and hope.

Yes, the world is getting more and more chaotic by the month. Yes, there is a sense of an approaching apocalypse. And yes, we will all stand before the judgment seat of Christ. But the good news is that it is Jesus who judges.