My last regular Revelation Revisited post before Christmas concerned the second of the Woes described in Chapter Nine, and I asked you to consider the following graphic: 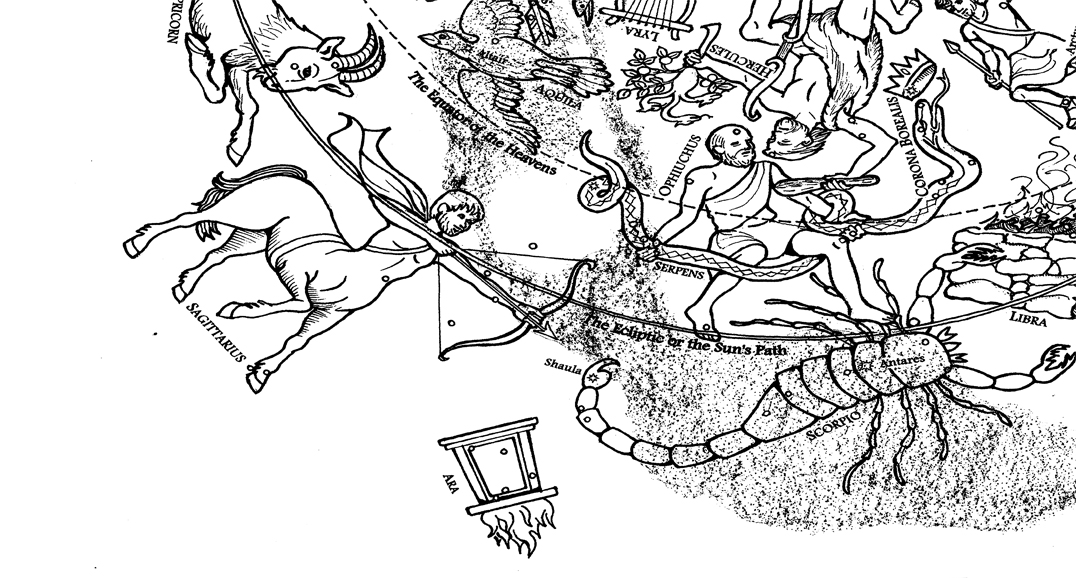 If you have not yet caught up to where we are in the book of Revelation, please have a look at the video overview on the website HERE or YouTube HERE. You can also view the summary as a pdf HERE

Some readers might have recognised the constellations of Sagittarius and Scorpio and others may have wondered if I had been smoking my socks. 🙂  I have already mentioned in this series that there is strong evidence that John keyed his inspired writing to the astronomical constellations as seen from his location in the Northern hemisphere. The use of a Sky Map identifying the visible stars in the night sky dates back to at least 2500 BC and there is abundant evidence that the ancient Mesopotamians made use of it to calculate seasonal occurrences. However, they also believed that it portrayed divine purposes and thus contained insights into the progression of the history of nations. For them, the science of astronomy was intertwined with their religious belief system.

The ancients regarded the southernmost constellations, as observed from locations such as Babylon and Jerusalem, as the gateway to a dark spiritual underworld. Scorpio, as its name suggests, is the great scorpion of the heavens. This arachnid appears in the scriptures in a number of places as a symbol of danger (Deuteronomy 8:15, Ezekiel 2:6). The Lord Jesus used it to depict demonic evil when he said to his disciples, “I saw Satan fall like lightning from heaven. I have given you authority to trample on snakes and scorpions and to overcome all the power of the enemy; nothing will harm you. However, do not rejoice that the spirits submit to you, but rejoice that your names are written in heaven” (Luke 10:18-20). In the book of Revelation Chapter Nine, the scorpion features in aspects of the demons that rise up from the pit of Hell – the First Woe.

The constellation to the left of Scorpio is Sagittarius, the Centaur, half man half horse, with a drawn bow in its hands. With the exception of Chiron, the centaurs of Greek mythology were barbarous beasts given to drunkenness, debauchery, and rape and this would be a good description of what demons do. The book of Revelation describes a Second Woe, the horde of demons released by the sixth angel, as horses and riders.

Right at the bottom, the southernmost border of the Star Chart, is the small constellation Ara, pictured as a small upside-down altar of some sort. The Greeks had a goddess named Ara, and she was the personification of destruction and revenge. The Hebrew words Aram and Mara incorporate the same root and mean ‘utter destruction’ and ‘a curse’. I have already noted in my previous post (found HERE) that the second demonic plague of Revelation Chapter Nine, pictured as grotesquely mutated horses, is connected in some way to the Altar of Incense (Revelation 9:13) which we know from Revelation 8:3-4 is a symbol of prayer and worship. Revelation 9:20 strengthens this connection by declaring that the victims of these invading demons are caught up in idolatrous worship.

“But wait, there is more” as the Home Channel gizmo salesmen are famous for saying; Pictured in the Star Chart, just above Scorpio, is a depiction of a man with a huge snake in his hands. They represent the intertwined constellations of Serpens and Ophiuchus, which in Aramaic are called ‘The accursed reptile and the strong one’. The Greek construct for Ophiuchus is Æsculapius and the historian Hislop describes Æsculapius as the Epidaurian snake which the Romans worshipped along with fire as the child of the sun. He records the story that in a time of deadly pestilence this ‘god’ boarded a ship and traveled from Epidaurus to Rome and that when it slithered off the ship the plague stopped. The ancient Aramaic name itself means ‘the instructing snake’, and the inhabitants of Pergamum worshipped it as a healing and enlightening deity (see Revelation 2:12-17).

So here in the depictions of five of the southernmost constellations is a graphical presentation of the Woes of Revelation Chapter Nine. From this point on in our journey through the book of Revelation it is going to become increasingly obvious that John used the constellations of the night sky as a key device.

In my next post I want to deal with Revelation Chapter Ten, The Angel and the Little Scroll’. In preparation for this you might like to answer the question, ‘What is the little scroll in the angel’s hand’? Until then …