Pragmatism is the theory that truth is a matter of the practical usefulness of beliefs. What works must be true. Truth is equated with results – to illustrate this let me give a recent example of this from church life.

For several months a group of people in one of our congregations wanted the leadership to endorse their particular approach to ministering healing. They believed that many human problems were the result of ‘generational curses’. I am not going to argue here from the biblical evidence; I want only to point out the role that pragmatism played in the discussions. The Elders argued that the only basis for the ‘truth’ of such an approach to healing had to come from the Word of God. The questions were; ‘What do the scriptures in their entirety teach in this regard?’ ‘What did Jesus teach and practice in this regard?’ and, ‘What did the early church practice in this regard?’ At first there was some attempt by the people concerned to validate their practice from isolated proof texts, but in the final analysis it came down to, “But it works, so it must be true”. More comprehensively put, the claim was as follows; “My nephew was sick and dogged by bad luck for years. When I spoke to him about this he admitted that his grandfather, on the other side of the family, had been a member of a secret society. ‘There you have it!’ I told him, ‘you are under a generational curse!’ So I immediately broke the curse in the name of Jesus and by pleading the blood of Christ, and he was healed and his whole fortune changed from there on. So, it must be true and of God because it ‘worked’.” 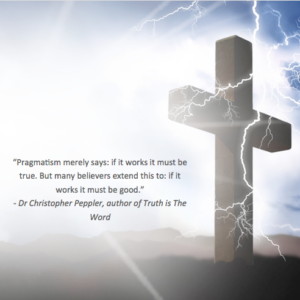 To quote  from my book Truth is The Word:
The pragmatic theory encompasses the thoughts of scholars such as William James, John Dewey, Charles Pierce, and F.C.S. Schiller. It appears to be the dominant theory of truth in our age. Despite protestations, it is probably the dominant theory of truth amongst many Christian groups. I would go one step further. Pragmatism merely says, “If it works it must be true,” but many believers extend this to “if it works it must be good.”
So, if the real basis of truth is neither relativism nor pragmatism, then what is it? I will answer this question in my next post by returning to the encounter between Pilate and the Lord Jesus.
Truth is The Word – Restoring a Lost Focus has recently been revised and published in e-book format. Find out more from the author on Jesus, truth and biblical interpretation in this revised edition!