If Pilate had asked a Greek philosopher or a postmodern theologian the question, “What is truth?” he would probably have got a long and confusing answer. If Pilate were here today to ask his question of the average evangelical theologian, he would most probably receive the answer, “The Bible is truth.”

Most evangelical, including myself, believe that the Bible is true, contains truth, and is truthful. However, is it the source of truth, the ultimate truth to which Jesus came to testify? When Jesus said to Pilate, “I was born and came into the world to testify to the truth” he could not possibly have had the Bible in mind. At that time only the 39 scrolls of the Old Testament existed – the books of the New Testament had not yet been written, let alone collated into what we know as the Holy Bible. So what then was this ‘truth’ that Jesus had in mind? It wasn’t the fact of his kingship and it wasn’t the Bible, it was … himself.
In the Gospel of John Jesus is introduced with these words; ‘The Word became flesh and made his dwelling among us. We have seen his glory, the glory of the One and Only, who came from the Father, full of grace and truth’ (John 1:14). Three verses later John states that ‘the law was given through Moses; grace and truth came through Jesus Christ’. Then, just to put the matter beyond dispute, Jesus made the definitive statement about himself when he said, “I am the way, and the truth, and the life.” (John 14:6)

So, in the trial before the Roman governor Jesus, the very source of truth, stood before Pilate and judged him. “What is truth?” asked Pilate; “I am the truth” was Jesus’ implied response. 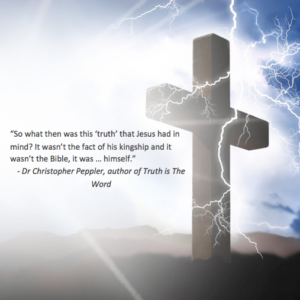 In my next and final post in this series, I will deal briefly with the practical implications of all this.
Truth is The Word – Restoring a Lost Focus has recently been revised and published in e-book format. Find out more from the author on Jesus, truth and biblical interpretation in this revised edition!