“If Jesus is not the Jewish Messiah then He is nobodies Messiah” Dr Michael Brown.

For the last several weeks we, in Lonehill Village Church, have been preaching through John’s Gospel using a first-person narrative style as posted in my last message, but, If you missed the message I preached on John 4 (from the woman at the well’s perspective) then click here. One aspect of this is the effect it has had on the preaching team. Each of us has found that in looking at the text through the eyes of someone in the story we have come to clearly perceive things that were previously vague. To tell the story effectively we have had to ask questions like “Why did Jesus say that the way He did?” and “What would the people then have understood him as saying?

Two things emerged with real clarity as we progress through the Gospel series:

Last week someone emailed to me about my position on the future of Israel – i.e., does God still have a special role for them as a physical nation? This, together with a reignited interest in the Jewish Pharisees sparked by our narrative experiences of John’s Gospel, led me to view several debates on YouTube concerning Jesus as the Jewish Messiah.

The three debates I watched are;

Each of them is very long, but they make for interesting and informative viewing. Dr. Michael Brown features in all three and his main website is https://askdrbrown.org/. I appreciate Dr. Brown very much, not only because he is extremely knowledgeable, but also because of his humble and friendly attitude towards debate opponents who at times are bombastic, rude and dismissive. You can find some information on this remarkable man at https://en.wikipedia.org/wiki/Michael_L._Brown and https://askdrbrown.org/biography/

I don’t intend to rehash or even comment on the substance of the debates. Instead, I want to describe the overriding emotion I experienced as I watched and observed. I want to do this because I think it may influence the way some of my reader’s regard both Jewish people and the nation of Israel.

In the Gospels, the Pharisees displayed extreme offense at what Jesus proclaimed himself to be. Not only was He claiming to be the Messiah but, more than that, He declared himself in many ways to be God Incarnate. The Rabbis I observed debating with Dr. Brown are the modern-day descendants of the Pharisees of New Testament times… and they are as offended by Jesus as were their forefathers.

To them, then and now, Jesus’ claims to divinity were the highest form of blasphemy eliciting emotions ranging from extreme irritation to rage. For them, it is inconceivably foolish to consider Jesus the Jewish Messiah, let alone God in human form. But of course, if Jesus is not the Jewish Messiah then He is nobodies Messiah. No amount of debate and logical argument will convince them otherwise for they are in the thrall of a spiritual blindness. John stated the problem by quoting from Isaiah the prophet; ‘they could not believe, because, as Isaiah says elsewhere:

A major contributing factor to the blindness of today’s rabbis is that they consider the oral tradition of the teachers of Israel to be as God-given as the Old Testament itself. As a result, they place the interpretations of past Rabbis above the obvious context and import of many Old Testament scriptures. Of course, they regard the New Testament as irrelevant.

Flowing from their offense at Jesus himself is an equally passionate reaction to Christians who seek to persuade them that Jesus is indeed the way, truth, and life. Some regard evangelism of Jews as ‘murder of the soul’ while others label it more mildly as disrespectful interference in Jewish faith and tradition. Some Rabbis regard Evangelical Christians as idolaters, because we worship a ‘man’ (Jesus), and thus condemn us to Hell. 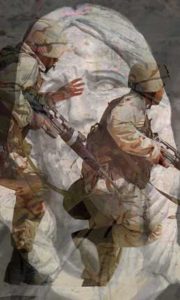 So what was my dominant emotion as I listened to these terrible statements? Neither irritation, nor anger, but profound sadness. I realised more acutely than ever why Paul had written; ‘I have great sorrow and unceasing anguish in my heart. For I could wish that I myself were cursed and cut off from Christ for the sake of my brothers, those of my own race, the people of Israel. Theirs is the adoption as sons; theirs the divine glory, the covenants, the receiving of the law, the temple worship and the promises. Theirs are the patriarchs, and from them is traced the human ancestry of Christ, who is God over all, forever praised! Amen’ (Romans 9:2-5). I felt just something of what Jesus must have experienced when He stood on the Mount of Olives and lamented, “O Jerusalem, Jerusalem, you who kill the prophets and stone those sent to you, how often I have longed to gather your children together, as a hen gathers her chicks under her wings, but you were not willing. Look, your house is left to you desolate. For I tell you, you will not see me again until you say, ‘Blessed is he who comes in the name of the Lord.” (Matthew 23:37-39).

I believe that Paul teaches in Romans 9 to 11 that the Jews will one day turn to Jesus in their millions and that the nation of Israel will stand as a testimony to God’s faithful covenant-keeping. But until then I see such a wonderful, intelligent, and industrious people lost in spiritual darkness. I realise that for many Jews these sentiments are in themselves condescending and offensive but I cannot deny how I feel for the Holy Spirit has touched my heart. I pray, and I ask you to join me in praying, for the swift fulfillment of the prophecy of Revelation 1:7;

‘Look, he is coming with the clouds, and every eye will see him, even those who pierced him; and all the peoples of the earth will mourn because of him. So shall it be! Amen’.

I sense that the time is near when Jews everywhere, and in Israel in particular, will realise that Jesus is, and always has been, their divine Messiah. The spiritual blindness will lift, and in their millions they will declare, “blessed is He who comes in the name of the Lord!”

If you would prefer to LISTEN to this post (along with a bit more information on the topic) then please click on the play button below.