Skip to Main Content
Series: The impact of the Jewish roots of Jesus

I have recently returned from visiting a fine church in Nashua, New Hampshire, USA. Once a month they hold an Erev Shabbat celebration where they recreate elements of the biblical festivals of ancient Israel. The idea is to connect with the Jewish roots of the Christian Faith and this has stimulated me to examine some of the Jewish background to Jesus’ life and teaching. Sometimes we struggle to fully comprehend what Jesus said and did because we view his life from our 21st century and cultural perspectives. In this series of posts I intend to examine a number of the more enigmatic saying of Jesus within the context of their original background. I have drawn some of my material from ‘Understanding the difficult words of Jesus’, by David Bivin and Roy Blizzard, ‘New Light on the Difficult Words of Jesus’ also by David Bivin, and ‘Walking in the dust of Rabbi Jesus’ by Lois Tverberg. 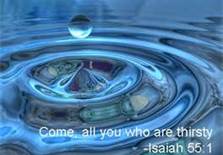 In this first post I will examine the background to John 7:37-38 which reads; ‘On the last and greatest day of the Feast, Jesus stood and said in a loud voice, “If anyone is thirsty, let him come to me and drink. Whoever believes in me, as the Scripture has said, streams of living water will flow from within him.” NIV

Jesus had gone up to Jerusalem for the Feast of Tabernacles, known as Sukkot. This was a week-long celebration to commemorate God’s provision for His people. The word ‘sukkot’, usually found in our English reference works as ‘ Succoth’, is used to signify the third group of festivals held in the 7th month of the Jewish religious year. Some trace its origin to the first halting place in the Israelites exodus from Egypt. The name itself means booths, or shelters, or tents and to this day orthodox Jews still erect booths in their gardens once a year to celebrate God’s goodness.

The last day of this festival was extra-special. In Jesus’ day the High Priest would walk down to the pool of Siloam and fill a golden urn with ‘living water’. The term ‘living’ described water that was running and not stagnant and had special significance for ritual washings and other ceremonies. The High Priest would then carry the water up to the great bronze altar of sacrifice in the Temple courtyard and walk around it seven times. While he did this the thousands of people accompanying him would shout “Hosanna! (Save us now!) and chant from Isaiah 12:3 ‘With joy you will draw water from the wells of salvation’. The most dramatic moment came when the High Priest raised the pitcher high in preparation for pouring the water over the altar. At that very moment Jesus shouted out, “If anyone is thirsty, let him come to me and drink!” In effect He was saying, “I am the source of the real living water that you sing of! Come to me!”

The scriptures Jesus was referencing when He made his dramatic declaration were Isaiah 55 vs 1,3,6,7; “Come, all you who are thirsty, come to the waters… Give ear and come to me; hear me, that your soul may live….Seek the Lord while he may be found; call on him while he is near. Let the wicked forsake his way and the evil man his thoughts. Let him turn to the Lord, and he will have mercy on him, and to our God, for he will freely pardon”. The priests would surely have known the passage Jesus was citing, and they would also have known how the passage they were singing from (Isaiah 12) ended. It started, ‘with joy you will draw water from the wells of salvation’ and ended at vs 6 with “Shout aloud and sing for joy, people of Zion, for great is the Holy One of Israel among you.”

To Jesus’ disciples this self-revelation should have been even more significant and they certainly understood it later because the apostle John wrote, ‘The Word became flesh and tabernacled for a while among us. We have seen His glory’ (John 1:14). God himself had come to live with his people, to tabernacle (Sukkot) with them, and to provide them with the living water of the Holy Spirit. Hallelujah!