In an article I wrote for Joy! in August 2009 I asked why we, as Christians, are generally so passionless and powerless. I suggested that one of the reasons was that so many of us are confused concerning the nature of prayer, the stewardship of spiritual power, and the need to proclaim in word and ministry – Prayer, Power, and Proclamation.

Part of the problem, as I see it, is that we have separated these three elements instead of integrating them into one – three yet one. Conversely, we tend to confuse these elements with each other.

A well known adage is, ‘there is power in prayer’. But there is no power in prayer. Prayer precedes power, but in itself, prayer is simply communion with God. Prayer is the communication component of our end of an intimate relationship with our heavenly Father. God is certainly powerful, but how can the act of speaking to him have power in itself? Yet preachers often tell us that prayer ‘works’ (another expression which confounds me). Powerful results of prayer are simply evidence of God’s response.

We confuse the response with the request when we say that there is power in prayer. Even more seriously, we confuse the object with the method. God is the one to whom we pray (object), and prayer is the method of communicating with him. Yet prayer is foundational to both power and proclamation.

In prayer we express our dependence on God and our willingness to proclaim His will in word and deed. In prayer we ask Him to fill us with power from on high so that we are able to powerfully proclaim His word.

As children of God, we also ask Him, in prayer, to exercise His power to achieve what we perceive to be valid kingdom endeavors. It might appear on the surface that our prayers have released power, but it is actually God who chooses to manifest His power. An example of this is in Acts 4:29-30, where the disciples prayed, “Now, Lord, consider their threats and enable your servants to speak your word with great boldness. Stretch out your hand to heal and perform miraculous signs and wonders through the name of your holy servant Jesus.” Verse 32 records that “After they prayed, the place where they were meeting was shaken. And they were all filled with the Holy Spirit and spoke the word of God boldly.” The disciples prayed, and God responded with a mighty demonstration of his power. 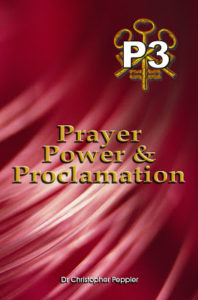 However, the text also reveals that God went further than just demonstrating His power; He also filled the disciples with spiritual energy so that they could speak His word with boldness. This is the second level connection between prayer and power. God may respond to prayer with direct acts of power, but He may also respond by imparting power to us, His children, so that we can act in His name. This seems to be the Father’s preferred response to our prayer requests. Why? I think it is because He wants us to grow up to be responsible and mature members of his household; children who have learned both dependence on Him and responsible stewardship of His authority and power.

As always, let’s take our queue from Jesus. Matthew chapter seventeen records how Jesus went up a mountain to pray. Whilst He was praying, He had a dynamic spiritual encounter, heard the voice of the Father, and received an illuminating anointing.

Prayer precedes power, and power is essential to effective proclamation. To find out more, please download my latest book ‘P3’ concerning power from on high.