‘When they saw the courage of Peter and John and realized that they were unschooled, ordinary men, they were astonished and they took note that these men had been with Jesus.’ Acts 4:1 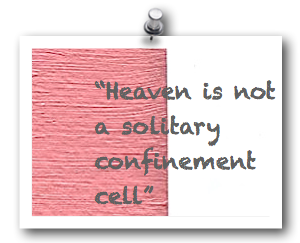 To embrace religion is to let go of Jesus, because Jesus shunned religion. Equally, to believe that Christianity is a private affair is to miss the whole point of it. Heaven is not a solitary confinement cell; it is a space of endless ‘family’. To know Jesus is to enter into his family, and to be part of his family is to be part of the church, both here and in heaven.
Religions have communities of fellow adherents, but they are lifeless groups gathered around doctrine, or tradition, or a leader. Relationship is the glue of living Christian community. Relationship is also the purpose of that community; I am in the church community not to serve a cause, or to promote a philosophy, or to make converts, but to be in relationship with Jesus and his disciples.
Religions are mainly knowledge or skills based. Ones standing and role within a religious system is dependent on what one knows or what can do. Our standing within Christianity is dependent only on who we know, not on what we know. It is also based on what God can do, not on what we can do. In the very first years of the church, the disciples were different from others not because of their knowledge or skills, but because they had been with Jesus. It is still the same today.

[Technical note to reader: If you would like to comment, simply click on the hyperlink below that says ‘X Comments’, a new page will open where you will be able to write your comment]