Millennium is a word that has caused more confusion than possibly any other word in the Bible, but it isn’t actually in the Bible.

Revelation 20:3 refers to a 1,000-year reign of Christ. The Greek word used for 1,000 is ‘chilia’ but in 405AD Jerome  compiled the Latin Vulgate version of the Bible and translated the word as ‘millennium’. So this became one of the several Latin words that have crept into some English translations of the Bible that never were in the earliest Greek manuscripts. 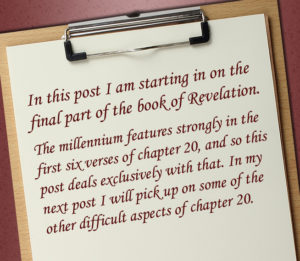 Over the last several hundred years, various scholars have built systems of interpreting biblical prophecy based on the books of Daniel and Revelation along with the meddlesome Millennium. But it’s not really the word itself that is the problem, it’s the insistence by its champions in interpreting Revelation as a literal calendar of events.

The basis of the various Millennium schemes is that Jesus will return physically to Earth to rule ‘with an iron sceptre’ (Revelation 2:27) for 1,000 years.

This idea is developed from just six verses of scripture, Revelation 20:1-6, and the outline of most schemes goes like this:

Now consider more carefully some of the problems caused by this belief system:

What do I believe concerning the 1,000 years referred to in Revelation Chapter 20? Well, I can’t really state it any better than I did in my book Revelation in the Stars, which is available as a free pdf, should you wish to read it, HERE:

I believe that the millennium is a present reality. Christ ushered it in with his first advent, and it will be succeeded by the final state at his second coming. I believe that Almighty God has only one plan of salvation, based on the finished work of Calvary. God saved specific Old Testament saints through their trust in his grace, and all other believers since have been saved by faith in Jesus Christ. I believe that there are just two ages – this present age, and the age to come referred to as the new Heaven and Earth. I believe that at the cross Jesus Christ bound Satan from having authority over humankind, but that he will loose the devil on Earth near the end of time. Actually, I think that Satan will incarnate as the final anti-Christ. I believe that the church lives in a world of tribulation, but that this tribulation will grow progressively worse. At the very end, Jesus will come again, in a single cataclysmic event, to bring history to its close, and to usher in the final state. He will come with those believers who have previously died and have been with him in Heaven. As he comes again to Earth, the believers still on this planet will join him (be raptured) and accompany him to the planet’s surface, where he will judge all mankind. God will resurrect all humanity with immortal material bodies, both the saved and unsaved, and all will stand before the judgment seat of Christ. He will banish forever from his presence those whom he does not know, the unsaved. Those who are his disciples will receive rewards in accordance with what they have done during their earthly lives. Then this present world will be purified by fire, destroyed, and remade without the limitations of space and time as we know them. Heaven and Earth will be one, and God will at last dwell within his creation with his beloved children.