“He is risen. He is risen indeed!” The 2016 commemoration of Crucifixion Friday and Resurrection Sunday are now ticks on the calendar, but their reality and influence live on in all Jesus-followers. 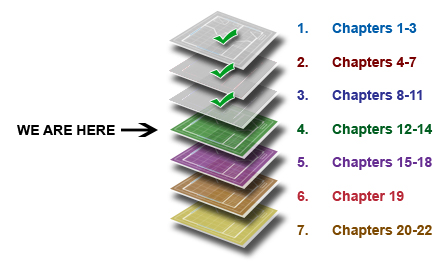 So, after a brief interlude, I am back to contemplating the rich images and text of Revelation Chapter Twelve. It is a key part of the book because it marks the start of Part Four of Revelation and also contains the clearest connection to the ancient message of the constellations. I think that the best way to continue my coverage of this chapter is to deal with some of the details; but be prepared because you know the saying ‘the devil is in the detail’. Previously I was concerned that some folk may lose sight of the big picture, but I now want to try to prevent important details from going completely out of focus.

Chapter 12 starts with a description of a woman ‘clothed with the sun, with the moon under her feet, and a crown of twelve stars on her head’ John is keying linking the image to the constellation of Virgo, the sign in the heavens and explaining its meaning. I have mentioned in a previous post (where you can see an image of this portion of the star chart) that Israel was sometimes referred to as the wife of Yahweh and that the nation’s greatest moment came ‘when Mary, her finest offspring, gave birth to Jesus Christ’.

The next two verses (Revelation 12:3-4) interpret the meaning of the constellation Hydra which depicts the devil as a dragon/serpent. Heads, horns, and crowns stand as well-known symbols of societal position and power. The great red dragon in the sky is set on devouring the Christ child as soon as he is born, and we know that Satan sought to kill Jesus from the get-go; working through his servant Herod to murder all children under the age of two in the vicinity of Bethlehem in the evil hope that one of them would be Jesus. But he failed because God sent an angel to tell Mary and Joseph to take the child and flee to Egypt.

I have previously explained how  Revelation 12:5 compresses the life, death, resurrection and ascension of the Lord Jesus into one amazingly brief statement, but the next verse contains some detail that needs explanation. It states that ‘The woman fled into the desert to a place prepared for her by God, where she might be taken care of for 1,260 days.’  The number 1,260 is a key to interpreting this verse. You see, an ancient Jewish prophetic month consisted of 30 days and so 1,260 days equates to 42 months or 3½ years in prophet-speak.  Daniel predicted that a great satanically inspired national leader would arise in opposition to God’s plans in and through Israel, and he said that ‘the saints will be handed over to him for a time, times and half a time.’ (Daniel 7:25) It became generally accepted that Daniel’s ‘times’ should be seen as years but also as a broken period of time. You see, the number 7 represented perfection and completion, and so half of that signified a broken and incomplete period. Jesus ministered for 3½ years before He was crucified and John’s original readers would have understood the connection to Daniel’s prophecy.

So, the message of verse 6 of Revelation 12 is that God has and will continue to preserve His people against the devil’s onslaughts. The Jewish race has been terribly persecuted for millennia yet it survives and thrives, and this is evidence of God’s faithfulness. Just so will the Lord preserve believers in our day.

I have covered a verses 7 to 12 in my previous posts and recent sermon but there are two particular verses that need more attention.

“Now have come the salvation and the power and the kingdom of our God, and the authority of his Christ”. (Revelation 12:7)

The question  is, ‘Does this only apply to the very end of all things?’ The answer is that it applied to the time that Revelation was written, it applies to us right now, and it will apply when Jesus comes again to usher in the end of days. In Revelation 4:8 God is described as The One ‘who was, and is, and is to come’. His Kingdom has come, is coming, and is yet to come; the Lord Jesus came in person about 2,000 years ago, He is active now through The Spirit and the church, and He is coming again soon to judge the living and the dead. Jesus responded to His disciples’ delight that demons obeyed them with the words, “I saw Satan fall like lightning from heaven” (Luke 10:18) yet we know that the devil’s expulsion from heaven came when Jesus rose from the dead some time later. Time is not linear and one-directional in the spiritual realm as it is here on earth, but even so we can understand Jesus’ words as meaning that in His life and ministry on earth He was bringing about the devil’s expulsion from heaven; a ‘ministry’ that reached its dramatic climax when Jesus rose from the dead, and which continues to be manifest in the ministry of the church.

This last aspect reflects in verse 11 of Revelation 12 which declares:

‘They overcame him by the blood of the Lamb and by the word of their testimony; they did not love their lives so much as to shrink from death’.

Satan is overcome by the believers who constitute the church, and their victory is not achieved through power, or politics, or wealth, but through their self-sacrificing testimony in word and deed about .. Jesus.

Revelation 12 verses 13 to 16  are an elaboration of verse 6,  with the added insight of how the constellations of Aquila and Aquarius tell this part of the unfolding story – but I will need to unpack this in a separate article, so watch this space.

Well, the devil may be in the detail, but the overriding message of this part of Revelation is Jesus’ victory over him and God the Father’s protection of His people. Hallelujah!