I do not believe that words are power ‘capsules’. Instead, they contain meaning, and they convey intent and authority. In this way, they focus the release of spiritual energy and act as a sort of targeting mechanism.

Let me use the incident recorded in Acts 13:11 as an example. Paul said, “YouŒ are going to be blind, and for a time you will be unable to see the light of the sunŽ”.

Words specify the intended action  “You are going to BE BLIND”

Words describe the result Ž “for A TIME”

Here is the model again, this time showing the role of words in the process of ministering.

How is it that words spoken in faith can direct spiritual power? Unfortunately, the Bible does not give any information on the ‘how’ of it. This is not unusual, for in many instances the scriptures record that something ‘is’, yet give no indication of how it came to be. The creation account is an example of this – “And God said, ‘Let there be light,” and there was light’” (Genesis 1:3).

From at least the days of Plato, metaphysical thought systems have included the concepts of vibration and energy waves. Sounds are vibrations that travel in waveform. Electromagnetic energy also has a waveform. So, the sound of spoken words could, I suppose, resonate sympathetically with higher wavelengths. In this way, sound could perhaps translate into energy. Words could thus produce actual physical effects. However, I don’t think that this is what happens. Quantum physics will probably provide us with a more reasonable explanation. It seems that, at the quantum level, focused thought has the ability to change reality. I suspect that at the spiritual level something similar happens. Our focused and sustained intent, expressed in faith, and articulated in words, somehow has the ability to direct spiritual energy. The Bible, as I have already stated, has nothing to say about how this works, and so all of this is purely speculative. However, the scriptures do record that God created light and matter by proclaiming them; “And God said… and there was…” (Genesis 1:3) This, and the examples drawn from Jesus’ life, provide the fact of the matter, but the scriptures still do not given clarity on the ‘how’ of it.

The scriptures attest to the practice of laying hands on people for healing. Most Christians practise this, although many, I suspect, perform it as a sort of Bible-based ritual. My understanding is that spiritual energy can transfer from one person to another through physical contact, in faith. I have already cited and discussed the case of Jesus and the suffering woman. However, I have also made the point that on occasions Jesus healed with words alone, and at a distance. 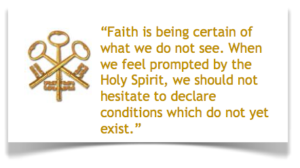 Faith is being certain of what we do not see. When we feel prompted by the Holy Spirit, we should not hesitate to declare conditions which do not yet exist. For instance, at the seminary I am involved with we were anxiously awaiting government registration for our programmes. We had done all we could, yet the officials at the Department of Education were taking an inordinately long time in finalising our application. One Saturday morning, at a church prayer meeting, I felt the strong prompting of the Holy Spirit. I stood up and declared the removal of the hindrances to registration and the issue of approval. Just a week later, we received the long-awaited certificate of registration.

There are some obvious dangers here. We have to realise that the Holy Spirit gives us whatever power we have, and that it is not self-generated. We need to ensure that others understand this when we minister to them, or when we make declarations. If we elevate ourselves, or allow others to regard us as ‘special’, then God may not entrust us with further power. Remember, King Herod paid dearly for attempting to glorify himself (Acts 12:22-23).

The ‘name-it-and-claim-it’ abuses of recent years have caused many more conservative believers to shun any form of declaration of the sort I have been detailing. However, we should not allow aberrations to detract us from truth. Jesus proclaimed, and things were as he proclaimed them to be. He also instructed his followers to do likewise (Matthew 21:21). So, the real question is ‘on what grounds do we NOT do what he modelled, taught, and commissioned?’

Words are ways of expressing meaning, and in that sense they are thought containers. Can they also be energy containers? I don’t think so. Words express the intent of the speaker. When we address a sentient being, either human or demonic, our words convey authority and intent. When we direct them at non-sentient objects, then the words serve as a focusing mechanism. They identify and clarify the objective, they specify the intended action, and they describe the result. The speaker releases spiritual power by faith and directs it in accordance with the words spoken.

Why then do we need to speak aloud? Why won’t silent words, thoughts, suffice? My understanding is that spoken words make concrete, precise, and definite, the intentions of the mind. Using the analogy of the laser gun again, the marksman first thinks about shooting at the target, but before he can hit the mark, he has to physically align the gun and squeeze the trigger. In the spiritual world, words act in the same way as the gun sights and the marksman’s hands as he aligns the weapon.