We all have core values, even if we cannot express them easily.

Core values are the guiding principles that determine our behaviours and priorities. As individuals, we absorb these as our parents embed them into us from an early age.

In the case of organisations, the founders entrench them in the constitution and corporate mission statement. The observable evidence of core values is the way we live, what we say and do, and how we prioritise our time and resources. Whether consciously adopted or unconsciously inherited, core values flow out of an appreciation of who we are. If you define yourself primarily as a parent then your core values will reflect this in a focus on such things as nurture, education, protection, and so on. If you see yourself primarily as a Christian, in the true sense of that word, then your core values will flow from that source of identity, e.g. “I am a child of God, a disciple of the Lord Jesus Christ, and a Christian brother/sister in God’s household, the church.” 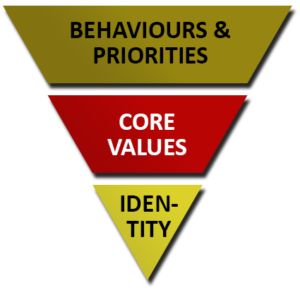 Here is a diagram that should help to clarify the relationships between identity, core values, and behaviours. Identity yields core values, which in turn yield behaviours and priorities. At an organisational or community level, the relationships between these three are usually intentionally formulated and set out in documents such as mission statements. Once again, the sense of identity is the primary determinant of core values and the subsequent behaviours that flow out of these key principles. I understand the identity of a local church as ‘an extended family of God in a specific location, centred on Jesus, prescribed by the Word of God, and dependent on the Holy Spirit.’

I had the privilege of establishing a local church nearly three decades ago and in its formative years we set out our core values under the acronym ROADS – Relationship, Outreach, Anointing, Doctrine, and Structure. Under each of these headings, we developed a compact statement of the core beliefs. For instance, under the heading of Relationship we wrote; ‘We are a church family in relationship with God and each other within an environment of order, participation and accountability. We value and seek to practice love and acceptance and see our church as a ‘city of refuge’. We are principle, value and relationship based rather than rules or results based. Ministries are motivated from within rather than imposed from without; leadership’s primary roles are serving, equipping and facilitating rather than initiating programmes.’ From this statement flowed the following clear core values:

It is easy to see the role these core values play in decision-making, priority setting, and behaviour regulation. The maxim when evaluating options is:

‘Does this strengthen and promote these values or does it undermine them?’

The two main challenges to this simple yet effective model are (i) Keeping the values pyramid the right way up, and (ii) Resolving perceived tension between different values.

(i) Keeping the value pyramid the right way up.

If the organisation or community, in this case the local church, loses sight of its core values, then its behaviours and priorities will erode or even change over time. New members and leaders come into the church bringing with them often divergent or contradictory values. These folk will evidence their values through their behaviour. If there are enough ‘new’ people in a church who have not been properly inducted into the value system, then the church as a community will start to adopt these different behaviour patterns. If this is left unchecked then some of the existing core values will be effectively replaced even though the official statements of the church still enshrine them. When this happens, tension increases in the church and can result in a church split or a church community that says one thing but lives a lie.

The solution to this potential polar shift in church life is to ensure that new members are inducted into the value system of the church as early as possible. Well-established leaders need to disciple new leaders, and preachers need to regularly teach the core values. Ultimately, actions speak louder than words, so they say, and the way the church operates and prioritises will be the best ‘teacher’ of values.

What sometimes happens is that two values appear to be in tension with each other. For instance, one Core Value might be Church as Family while another value is Numeric Growth. How can a church family grow bigger without compromising its values of family participation and accountability? A church family must grow in maturity but, if it is to endure, it must also grow numerically. But, are these two principles in conflict?
If they are both regarded as equally ‘core’ then the leaders need to find a way of expressing both without compromising either. Building a much bigger auditorium in order to allow for numeric growth could seriously compromise the ‘family’ value and ultimately destroy it. I believe that the resolution of this perceived problem is to consider how the church community can reproduce itself. It could plant another congregation; it could establish a network of independent but co-dependant churches in the area; it could meet regularly in small groups and occasionally in large congregations, and so on. Church leaders all over the world, and in every generation, have tried these, and more, with varying degrees of success or failure. Some others have settled for numeric growth limited to the natural attrition in their church family. But others have abandoned the family value and established mega churches with top-down organisational-type leadership and programmes.

The big issue for me is intentionality. As an individual, family, or organisation, we will behave and prioritise according to our core values. If we are not intentional about establishing and preserving these values then we, our families and our churches, will default to something that may no longer express who we believe we are. Identity yields values and values yield behaviours and priorities, but it also works in reverse I am afraid.

If you feel adrift in this life and find decision making painfully confusing then perhaps you need to re-examine your core values. When your children grow into their teenage years I strongly suggest that you as parents spend time and effort in inculcating core values into them, primarily through example and discussion. If there are new leaders in your church, and you are the leader-among-leaders, then I recommend that you ensure that all on the leadership team understand and buy into the core values of the church. If there appears to be tension between different values then I suggest that you schedule a workshop to carefully evaluate the core values and find ways of resolving the tension.

Jesus knew His identity and thus was committed to the core values that expressed this identity. The wonderful foot-washing scene recorded in John’s Gospel starts with the words; ‘Jesus knew that the Father had put all things under his power, and that he had come from God and was returning to God; so he got up from the meal, took off his outer clothing, and wrapped a towel around his waist. After that, he poured water into a basin and began to wash his disciples’ feet, drying them with the towel that was wrapped around him’ (John 13:3-5). Jesus knew that He was the Son of God, and so a core value of His was self-giving service. Just so with we who are His disciples, for Jesus concluded His demonstration of love in action with the words;

‘Now that I, your Lord and Teacher, have washed your feet, you also should wash one another’s feet. I have set you an example that you should do as I have done for you’ (John 13:14-15).