Seven is a number that occurs many times in the Bible, particularly the book of Revelation, and symbolises ‘completion’. So now, as we come to the final chapters of Revelation, we find the cycle of creation completed and a new cycle inaugurated. Revelation 21:1, which I have just quoted, continues with the words, ‘for the first heaven and the first earth had passed away, and there was no longer any sea’. Other scriptures also describe something of how the old heavens and earth will pass away, for instance, 2 Peter 3:10 has; ‘On that Day the heavens will disappear with a shrill noise, the heavenly bodies will burn up and be destroyed, and the earth with everything in it will vanish’ (TEV). Isaiah prophesied the end of the old with the words; ‘All the stars of the heavens will be dissolved and the sky rolled up like a scroll; all the starry host will fall like withered leaves from the vine, like shrivelled figs from the fig tree’ (Isaiah 34:4). John echoed these words in Revelation 6:13-14 where he wrote; ‘the stars in the sky fell to earth, as late figs drop from a fig tree when shaken by a strong wind. The sky receded like a scroll, rolling up, and every mountain and island was removed from its place’.

The specific detail that ‘there was no longer any sea’ is interesting. I believe that John was connecting us back to the Genesis account of the first creation where it states that ‘the earth was formless and empty, darkness was over the surface of the deep, and the Spirit of God was hovering over the waters’ (Genesis 1:2). What I understand from this is that John wants us to know that the new creation will not be a gradual process like the first, but will be brought about in a sudden and swift manner. There could also be a second level of meaning to the absence of any sea because ‘sea’ in Old Testament times was sometimes seen as the breeding ground of evil, the place of the unsaved dead, and a symbol of rebellious nations – so the new world will not contain any of these elements. 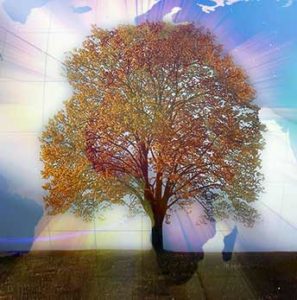 Although from verse 2 of Revelation 21 the symbol of a city, the New Jerusalem, replaces the ‘new world’ analogy, I am going to stick with it a while longer to draw out some of the other connections back to the Genesis account of the first creation. Genesis 1:16 records that on the fourth day ‘God made two great lights — the greater light to govern the day and the lesser light to govern the night’ but Revelation 21:23 states that the new creation ‘does not need the sun or the moon to shine on it, for the glory of God gives it light, and the Lamb is its lamp’. Genesis 2 tells of how God created a place for mankind described as a ‘garden in the east, in Eden’, (Genesis 2:8) and how a river watered this garden. In Revelation 22 we read of a ‘river of the water of life’ flowing down the centre of the new creation. Genesis also records the trees that God planted in Eden to provide food, as well as with the Tree of Life. Revelation carries this imagery into the new creation with the words; ‘On each side of the river stood the tree of life, bearing twelve crops of fruit, yielding its fruit every month. And the leaves of the tree are for the healing of the nations’ (Revelation 22:2).

The central idea of all of these comparisons is that the new creation will be superior to the first.

‘There will be no more death or mourning or crying or pain, for the old order of things has passed away’ (Revelation 21:2), and ‘No longer will there be any curse’ (Revelation 22:3). Of course, the biggest difference between the old and new creations is God’s direct presence with His people. In the old creation God was personally and directly present with His people relatively infrequently, for example:

Since then God has been indirectly present in and through His church through the ministry of the Holy Spirit… but in the new creation, He will dwell permanently with His people. ‘Now the dwelling of God is with men, and he will live with them’ (Revelation 21:3) See also Revelation 21:22 and 22:3-4.

The old creation started with God walking in the garden with Adam and Eve, but, as we know, the sin of rebellion soon ruined everything. In the new creation there will be no more sin, nor even the possibility of it, for the devil and all his followers will be removed and only God and His people remain.

And the truly good news is that if you and I know Jesus as Saviour and continue to follow Him as Lord, then we will one day experience the new creation, the HeavenEarth, the eternal dwelling of God with His people. Amen!

In my next and probably last post in this series, I plan to show how the New Jerusalem depicts not only the final state of creation but also  the church throughout the ages… I am looking forward to writing about this!