Some Charismatics and Pentecostals effectively separate the person of the Holy Spirit from the power that he imparts. As a very new Christian, I attended a public lecture by one of Britain’s great charismatic sons. He taught that the power of God was available for the taking. “Just reach up and plug in!”, he proclaimed. I believe this to be error. God the Holy Spirit is the source of supernatural power, and he imparts it to whom he wills. We do not ‘plug in’ to some impersonal energy field. God the Holy Spirit is the third person of the Trinity. He imparts spiritual energy to those of his children who ask.
As always, Jesus is our prime example; so we need to start with an appreciation of how he ministered in the power of the Holy Spirit.
Jesus ministered in the power of the Holy Spirit
The Holy Spirit came upon Jesus at his baptism. This is how Mark records the event: “As Jesus was coming up out of the water, he saw heaven being torn open and the Spirit descending on him like a dove. And a voice came from heaven: ‘You are my Son, whom I love; with you I am well pleased.’” (Mark 1:10-11). All three members of the triune Godhead are present in this scene. Luke records the same event, and then continues with the words I have already quoted: “Jesus, full of the Holy Spirit, returned from the Jordan and was led by the Spirit in the desert.’”(Luke 4:1)
In Luke 4:14 it states that “Jesus returned to Galilee in the power of the Spirit”. Here the inference is that the Holy Spirit empowered him. Verse 18 records how Jesus took his mission statement from the prophet Isaiah when he quoted, “The Spirit of the Lord is on me, because he has anointed me.” Once again, the text contains elements of both the person and the power of the Holy Spirit, “the Spirit of the Lord…” AND “…has anointed me”.
The Gospel of Luke contains some significant references to the anointing. Luke 5:17 states that, “One day as he was teaching, Pharisees and teachers of the law, who had come from every village of Galilee and from Judea and Jerusalem, were sitting there. And the power of the Lord was present for him to heal the sick.” The Holman’s Christian Standard translation has:“And the Lord’s power to heal was in Him.” Luke 6:19 is even more specific where it records that “the whole crowd was trying to touch Him, because power was coming out from Him and healing them all.” Jesus possessed power to heal; he was full of a supernatural energy which issued from him and dramatically affected those to whom he ministered. Luke Chapter 8 records the incident when the woman touched Jesus’ garment and received healing. Jesus sensed that someone had touched him and responded to his disciples’ protestations with the words “Someone touched me; I know that power has gone out from me.” (vs. 46).
Jesus received anointing at his baptism and, presumably, on subsequent occasions when he met with his Father in prayer. He received power at his baptism and somehow stored this power within himself. He then released the power to achieve his purpose of bringing glory to God the Father. 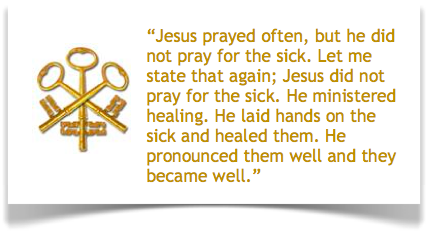 Luke 24:49 records the Lord’s instructions to his disciples to wait in Jerusalem until they had received power from on high. This they did, and the book of Acts records how they went out in the power of the Spirit and ministered supernaturally in Jesus’ name.
This pattern of empowerment, retention, and release didn’t only apply to Jesus, it also reflected in the ministry of his first disciples.
Powerful Peter
At the Gate Beautiful, a beggar asked Peter and John for money, and Peter responded to this request with the words, “Silver or gold I do not have, but what I have I give to you. In the name of Jesus Christ of Nazareth, walk.” (Acts 3:6). He did not have money, but he did have something of greater worth that he could give freely to the man crippled from birth. This is a significant text, because it reveals something of how Peter understood the anointing. He didn’t say, ‘I don’t have money but I will pray for you’. Instead, he said “but what I have I give to you.” What did he have? He had anointing from on high, the power that the Holy Spirit had imparted to him! Peter understood that he possessed this power – “what I have”. He also understood that he had the ability to impart this power to others – “I give to you.”
This incident reveals even more. Peter addressed the lame man and said, “In the name of Jesus of Nazareth.” He evoked the name of Jesus to indicate that he was acting under the authority of the Lord Jesus Christ. Then he said, “walk!” He declared, instructed, and proclaimed with authority. He did not pray. He was acting on what he had observed in the life of his master. Jesus prayed often, but he did not pray for the sick. Let me state that again; Jesus did not pray for the sick. He ministered healing. He laid hands on the sick and healed them. He pronounced them well and they became well.

Acts 5:15-16 contains another intriguing reference to the anointing that was upon and within Peter. It records that, “people brought the sick into the streets and laid them on beds and mats so that at least Peter’s shadow might fall on some of them as he passed by.” Now why would they do that? A shadow is just the absence of direct light, so why would people attribute healing power to Peter’s shadow? The way that I understand it is that a shadow indicates the close proximity of the object casting the shadow – Peter was walking past the sick people, and the power within him was radiating out of him and healing some of the afflicted. Like his master before him, power was coming out from him and healing them!
To subscribe to Truth is The Word, click here.
print