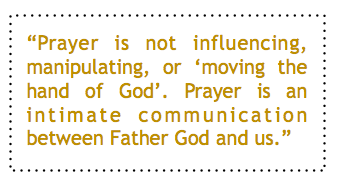 Prayer is not transacting spiritual business over God’s shoulder. Prayer is talking with God. More than that, it is communing with God.

I use the word ‘privilege’ in the heading to this section because prayer is exactly that, a privilege. As sons and daughters of the Father, we have the wonderful benefit of approaching almighty God in prayer. Prayer is not transacting business in the spiritual realm. Prayer is not influencing, manipulating, or ‘moving the hand of God’. Prayer is an intimate and immediate communication between Father God and us.
To subscribe to Truth is The Word, click here.
print