As explained in my previous post, words direct the flow of energy, but what determines the actual quantum of energy released?

Following the analogy of a battery, we can obviously only discharge what we contain. John said to the beggar, “What I have I give you.” (Acts 3:6). The two major considerations determining what charge a battery carries are, the capacity of the battery and the amount of charge received. A small battery can only carry a small charge. A big car battery would also only carry a small charge if (a) its capacity was reduced through sediment, lack of water, and so on, or (b) it was only given a small charge to store. In a similar manner, the charge of spiritual energy we can store is dependent on:

The thing which links us together (much like batteries linked in parallel) is a common mind and heart. Acts 1:14 records that the early disciples, “all joined together constantly in prayer.” The Greek word used here carries the fuller meaning of people coming together, both physically and with their minds in full agreement with each other. They come into agreement of heart and mind by praying as a group until they believe that what they ask for and envision is according to God’s will.

I do not believe that we can expand, grow, or increase our faith. Either we have it, or we do not. It is the catalyst, the trigger, for receipt and release of spiritual energy. Think of a regular light switch. If it is off, then the light is off. If it is on, then the current flows to the bulb and the light comes on. In this analogy, the switch represents faith. The ‘amperage’ of the current is, as already described, the quantity of spiritual energy present. But what determines the ‘voltage’ of the current? Voltage, returning to the analogy of a light bulb, is the potential force which pushes electricity through the wire to the bulb. In spiritual terms, faith is the switch which allows the ‘electricity’ to flow. ‘Voltage’ is the force which propels the ‘amps’ of power, through the switch of faith, and down the wire of the minister, to the recipient. 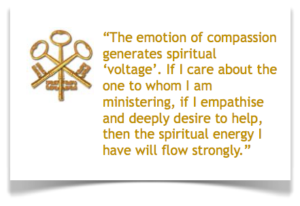 The emotion of compassion generates spiritual ‘voltage’. If I care about the one to whom I am ministering, if I empathise and deeply desire to help, then the spiritual energy I have will flow strongly. Jesus was moved by the emotional power of compassion (Matthew 9:36; 14:14; 15:32; 20:34.  Mark 1:41; 6:34). Compassion is what draws spiritual energy from us and imparts it to the object of our compassion. Diagrammatically, the process looks something like the following:

The Role of Compassion
Our potential for ministry is greatest when sin does not reduce our spiritual capacity, where we feel passionate about ministering, and when we ask the Holy Spirit to fill us with his power. The ministry potential of a group of believers is the sum of the individual potentials.