Skip to Main Content
During the worship last Sunday a man turned around to the woman standing behind him and told her to be quiet. Apparently she was singing exuberantly or shaking the back of his chair with her passionate response to the presence of God. Perhaps he was joking, although even then his action must have been triggered by a judgement he made – “This woman is offending my hyper conservative sensibilities and I have the right to tell her to stop it!” Oh really? Do we have the right to judge others like this, let alone express our judgement in this way?

When they brought to Jesus a woman caught in the act of adultery he challenged her accusers and then said to her, “Woman, where are they? Has no one condemned you?” “No one, sir,” she said. “Then neither do I condemn you,” Jesus declared. “Go now and leave your life of sin.” (John 8:10-11)
Jesus was not judgemental yet he certainly was not soft on sin. He did not condone what the woman had done and instructed her not to do it again. I suppose I could say that he judged the sin and not the person committing the sin but the fact is that he refrained from passing judgement on her.
Obviously we need to make judgements regarding situations, events, opportunities and so on. We also need to judge if something is right or wrong or doctrinally sound or not. Paul wrote, ‘I speak to sensible people; judge for yourselves what I say’ (1 Corinthians 10:15-16). However, he also wrote, ‘You, then, why do you judge your brother? Or why do you look down on your brother? For we will all stand before God’s judgment seat’ (Romans 14:10).
The tetchy man’s words wounded the dear lady behind him in church. Most of us aren’t that obvious in our judgements but overt or covert we still should not judge others, and if we do then we run the risk of being judged by the only one entitled to judge the living and the dead – God Himself. O dear, I haven’t just passed a judgement on the crass young man, have I? 🙂 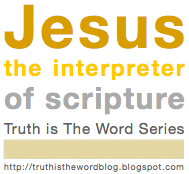 The Question of Leadership Failure
The Christocentric Principle