Skip to Main Content
Thousands of years ago Isaiah the prophet thundered to his generation and nation; “Justice is driven back, and righteousness stands at a distance; truth has stumbled in the streets, honesty cannot enter. Truth is nowhere to be found, and whoever shuns evil becomes a prey.”
This indictment is probably true of many nations in the world today but it is particularly true of my nation, South Africa. Isaiah could have been speaking directly to us.  As I write this I can hear the news droning in the background – government officials  trying to prevent the Public Protector’s report on the millions of public funds spent on developing the president’s private residential complex from going public – the much criticised secrecy bill now passed by parliament – a former freedom fighter responsible for the deaths of civilians and recently up on charges of drunken driving proposed as the head of the police watchdog organisation! Yes, truth has stumbled in the streets and is about to sprawl headlong into the gutter!
I have recently released a revised edition of ‘Truth is The Word’. It is about restoring a lost focus on the one who is truth itself, the Lord Jesus. In the introductory chapter I write;
‘We are living in an age when, as in the days of Isaiah the prophet, “truth has stumbled in the streets”, and is “nowhere to be found” (Isaiah 59:14–15). In our day, we have reduced truth to just another aspect of personal or community preference. Relativism  and pragmatism  rule. The motto of the age is ‘If it appears to work for me, then it must be true’. This is not just prevalent in society, business, and politics, but is also a dominant mind-set within the church. I do not believe we should allow ourselves to default into this mind-set.’
In my next post I want to explain and illustrate both Pragmatism and Relativism, and in future posts I plan to pick up different sub-themes from the book and present them to you in short ‘word bytes’. 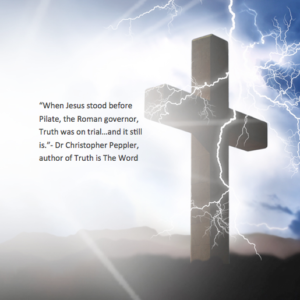 When Jesus stood before Pilate, the Roman governor, Truth was on trial…and it still is.

Truth is The Word – Restoring a Lost Focus has recently been revised and published in e-book format. Find out more from the author on Jesus, truth and biblical interpretation in this revised edition!